PoC I of CerCore / CellCore

Under Glycomics and Atlantis projects the CerCore™ technology for perfusion cultivation of mammalian cell was developed. Proof-off-Concept was though missing. The Animal Cell Technology group, Bioprocess / Bioproduction Division, School of Biotechnology, KTH, Sweden and the Swedish company Belach found resources 2011 from Vinnova / Sweden Innovation Agency for the PoC. 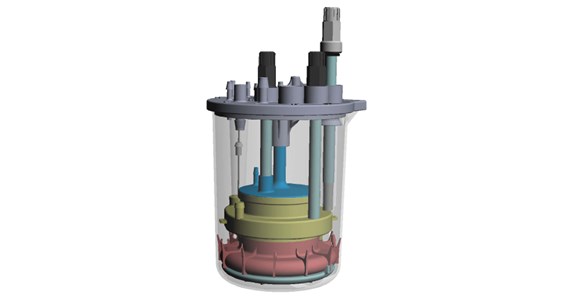 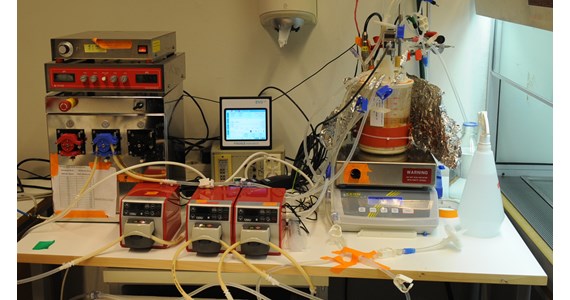 The activities of the KTH group are focused on mammalian cell-based processes representative of bio-pharmaceuticals and stem cell bioprocessing. Several projects of perfusion at high cell density and fed-batch development have been performed since 2008 by the Animal Cell Technology group, Bioprocess/Bioproduction Division, School of Biotechnology, KTH. The group leader, Dr. Veronique Chotteau, as well as PhD Mrs. Ye Zang has an extensive experience in mammalian cell cultivation and industrial bio-pharmaceutical processes. 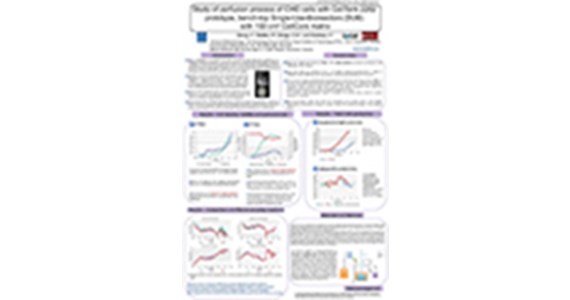 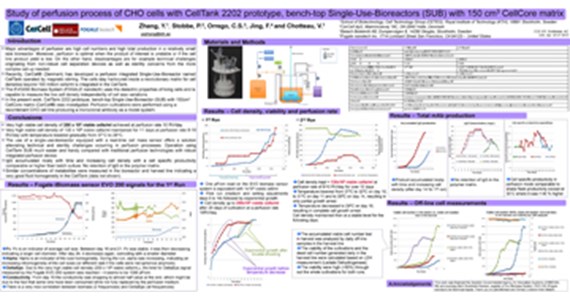 The POC results were presented at several conferences in EU / US 2012-2014 and posters can be found under download on www.prolifecell.com - thumbnails is shown here.

The project was sponsored by Vinnova, Sweden with 0,5 mio SEK – www.vinnova.se/en 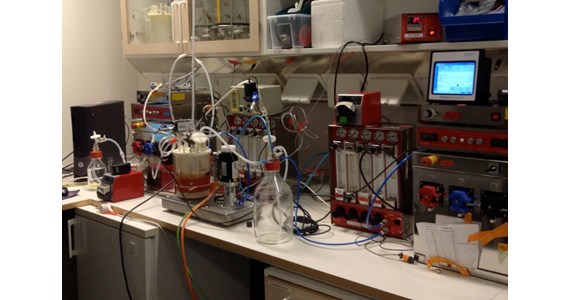 A follow up project for an article was performed 2015 by PhD Mrs. Ye Zang at KTH. Which became a book describing into details the work.

A new perfusion integrated Single-Use-Bioreactor (SUB) culture system CellTank™ has been developed for highly efficient production of recombinant products from mammalian cell lines. In this system, both adherent and suspension mammalian cell lines are harboured in a novel matrix concept (CellCore) composed of two parallel stacked matrix discs caged each in envelopes and immersed in media in a reservoir surrounding the matrix. CellTank™ are scalable by altering the matrix disc diameter and the number of matrix discs, generating a working volume spanning >1:1.000 from few cm3 to 15.000 cm3.

In this study, suspension-adapted recombinant Chinese Hamster Ovary (CHO) cells producing IgG monoclonal antibody were cultivated in the CellTank-34 (2202) prototype, bench-top SUB with 150 cm3 CerCore matrix. A real-time biomass sensor from FOGALE nanotech using the dielectric properties of living cells was used to measure the live cell density. The operation and performance of this setting were studied in perfusion cultivations.

A viable cell density of 200 x 106 cells/mL was achieved at perfusion rate 10 RV/day (Reactor Volume per day) during the first run. For the biomass sensor it was found that 1 pF/cm were equivalent to 1 x 106 viable cells/mL. In the second run, viable constant cell at density of 130 x 106 pF/cm was maintained for 11 days at perfusion rate 8 RV/day-10RV/day at reduced temperature. The cell specific productivity was comparable or higher than the one measured in batch culture in Erlenmeyer flasks. The volumetric IgG productivity was up to 61 times higher than in Erlenmeyer flasks batch cultures. There was no retention of IgG in the CerCore matrix.

As a bench-top Single-Use-Bioreactor, the CellTank™ system integrating the cell separation device can work long-term and stably at cell density above 100 x 106 viable cells/mL without IgG retention in the matrix. Being easy and handy to operate, CellTank™ offers a solution alleviating technical and sterility challenges occurring in traditional perfusion processes and makes an excellent choice for bio-therapeutics production.

Project was sponsored by the partners.

Check out ProlifeCell a part of Stobbe Group